I know I have been writing a lot about the latest Planned Parenthood butchery, but I feel it is important. I have been thinking a lot about abortion lately and how wrong it is. I admit at one time I considered myself Pro-Choice, although I never thought abortion was right, but I felt that a woman had the right to do it if she so chose. I don’t feel that way any longer.

My mind slowly began to change over the last few years, especially after I began my journey back to my faith. That is when I began to educate myself on abortion and Planned Parenthood. I was also more involved in politics back then and watching where my tax dollars were going and I decided it was wrong to be funding PP. 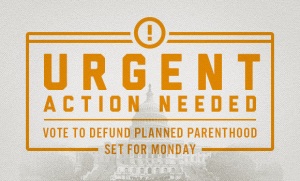 But my opposition in the last month or so has really escalated for two reasons. The recent videos of the butchering of babies is one of these, although not the main reason.

The main reason is the new part-time job I have. I have recently begun driving emotionally and physically challenged people from their homes to various programs that help them develop the skills they have. This has opened my eyes to so many things. I think of all the misconceptions I used to have about these people. Yes, I used to use the “R” word. Until I began this job I never realized that my guys are no different than I am. They have the same likes and dislikes as I do, they like to do things like I do, the only difference is they are a little behind me in their development. Although in many ways they are way ahead of me.

What has this got to do with abortion? How many times to we hear of abortions being done because the parents have learned that their baby might have some kind of developmental problem? Maybe they might have “Downs Syndrome” or autism, in other words, the parents think they will be less than perfect? If the parents of any of my guys decided they shouldn’t bring these less than perfect people into this world, I would not have the joy of being with them every day. I would never have learned from them. And both me and those they are with would never be the same.

There are two things we need to do to stop abortions.

There is a vote coming up Monday to defund Planned Parenthood. We already know that our pro-abortion president will veto it. It is my suspicion that many who will vote in favor of the defunding will only vote this way because they know it he will veto it and then they can claim they voted for it, but it was the president’s fault it wasn’t passed. Remember this come election time and don’t let them fool you!

Planned Parenthood has a lot of money to spread around buying votes and politicians. This is why we need to vote these people out of office. Here is a link to an organization that is very good at educating Catholics and others about the issues and how our elected officials vote. Check them out.

It is up to you and I to make a difference in this. Right now we have Planned Parenthood reeling and we can certainly send a clear message now and especially in the next election cycle.