I just got back from Mass, the first time I have been in some time. And once again I kick myself for not going every week because I really enjoy it. No matter what kind of week I have had I always leave feeling better. There is a certain kind of peace that comes over me.

Today was a special day in my parish. Friday was the 10th anniversary of our Pastor becoming Pastor. Father Peter didn’t say the Mass I went to but before the Mass he read the various announcements as he always does and added something extra. He told us that it was his tenth anniversary and he wanted us to know that he is still a sinner and that he apologized to any of us he may have hurt. This really got to me. 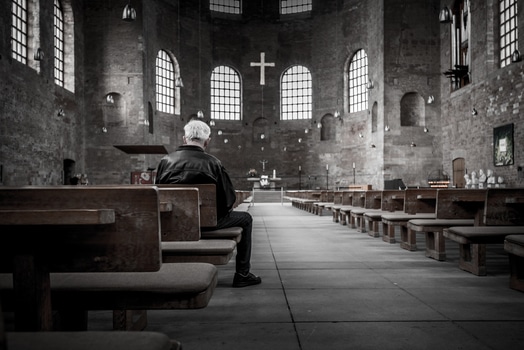 I know from past homilies that I have heard from Father that he struggles with an alcohol problem, just like me although I am pretty sure his is worse than mine. (Read the bible verse at the top of the page). As I have said in the past, God knows I am weak so he never let me get so bad that I couldn’t come back. He knows Father Peter is stronger than me.

But what really got to me is that Father admitted to us all that, just like the rest of us, he is human. In other words, priests are people too. I am not sure if I have ever written about this here or not, but one of the reasons I strayed away from my faith had to do with things that priests did. When I was young we were taught that priests were one step below God. We were told we could always trust them and that if we ever had a problem we could go to them for help. Then came the pedophile priest scandal and we learned that maybe that wasn’t always the case.

All the victims had been told the same thing as I (no I wasn’t a victim), that a priest could be trusted and the priest abused this trust, using it to get what he wanted. When these incidents were reported by a victim to their parents, many parents sided with the priest thinking a priest would never do something like that. After all who taught us that priests were good?

The second thing that happened had to do with my sister and some mental problems she was having. Without getting into the whole story, my Dad had gone to the pastor of our parish (not the one I go to today) and asked for help. According to my father, the priest basically said he wouldn’t help and shut the door in his face. Now I admit my dad could be stretching the truth, I wasn’t there, but I tend to believe at least some of what he told me.

Between these two incidents, I began to have doubts about priests and whether or not they were trustworthy or truly God’s right hand. When I began my journey back to the church I thought about this and I realized that although priests are called by God to serve, they are also human. They are tempted by the Evil One just like the rest of us. They have problems, whether mental illness or addictions just like we do. Some of them can handle them, some cannot.

Father Peter reminded me of this today. By his one little statement that he is still a sinner and asking us for forgiveness. You are forgiven Father.