Some days I can’t think of anything to write about, others the ideas just fly in, of course sometimes they just fly right out if there is nothing there to stop them, but that’s another story.

This morning I read a post on the blog “Coffee and Canticles” regarding  the common perception of the Apostles in the upper room after the crucifixion.  Pretty much every thing we hear, in fact I heard it on one of the Catholic radio shows I listen to the ther day, is that the twelve were “afraid of the Jews” and that is why they were “hiding”. As Daria writes in what she describes as a rant:

The reason for that retreat in the upper room was not to hide out, but simply to pray for guidance and await the promised coming of the Holy Spirit. It seems that their reasoning for this first novena was not that they were too scared to begin spreading the kingdom, but not sure exactly how to proceed in doing that. Hence the sensible decision to pray and wait. 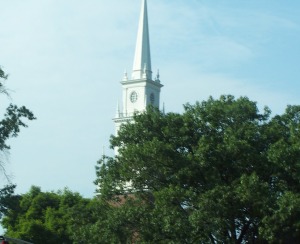 Now as any one who read this blog knows, I am far from being any kind of biblical scholar or learned theologian (heck I can’t even spell the word without my spell checker) but this makes sense to me. Looking at it as logically as I can, I have to wonder why they would be afraid? After all they knew God was going to protect them. True they knew they would be hated, beaten and persecuted, but they also knew they would be saved, Jesus told them so.

10 Do not fear what you are about to suffer. Behold, the devil is about to throw some of you into prison, that you may be tested, and for ten days you will have tribulation. Be faithful unto death, and I will give you the crown of life. 11 He who has an ear, let him hear what the Spirit says to the churches. The one who conquers will not be hurt by the second death.’ – Revelation 2:10

Therefore I don’t believe they were afraid at all.

The other reason I think they weren’t afraid was because the Jews probably thought after they crucified Jesus this would be the end of it. The leader was gone, the followers would get the message and scatter. Obviously this didn’t happen. This point leads us to today. In this age full of non-believers, many who probably have not studied or even read scripture, they are trying to o the same thing to those of us who do believe. The secularists continue to remove God from the public square and try to intimidate us into going to our “upper rooms” to be quiet and afraid, not realizing that we are not afraid. After all we too have Jesus on our side.