When you get to be my age is is so easy to get confused. Earlier this week 43 Catholic institutions filed 19 lawsuits in federal court to stop the HHS contraception mandate from going through. Didn’t you see it on the mainstream media?Even though it is strictly a religious freedom issue, you would never know it. Instead it has been made into everything but. and of course it gives the left wing media with all their secular progressive types just more reason to bash Catholics.

First we have this from the LA Times:

America’s conservative Catholic bishops are so worried that some woman in their employ will get access to birth control that they have filed 12 lawsuits against the federal government. What they are failing to see is a much bigger challenge that should have them truly worried: the independence of Catholic women.

The Bishop’s really don’t give a damn whether Catholic woman get birth control or not, they just don’t feel that the Government should force them to buy it for them since it is against their religious teaching. Simple as that, oh, and not to 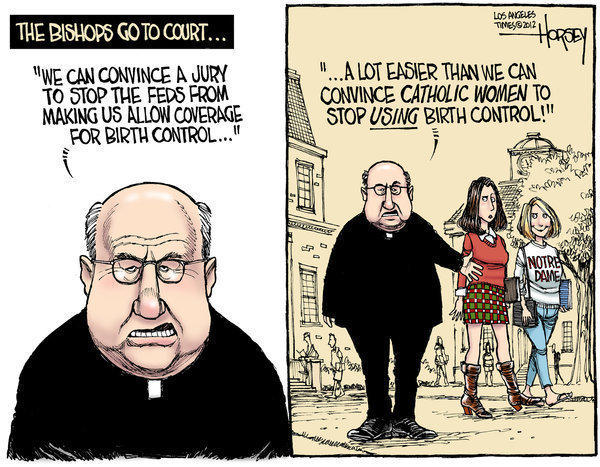 mention a little something called the First Amendment.

And then there is the Mister Ed (my apologies if I offended the horse) Comedy Show.  As the “Stop HHS” people point out, these four people are a joke. But then so isn’t everything on MSNBC. By the way, when you are on the Stop HHS page, sign their petition.

If you follow this blog you know that I beleive there is a definite attempt to remove religion from all public discourse. This is done in many ways, including through the mainstream media. These are two examples of exactly how they are going about doing that. The media misrepresents the facts, intentionally making it look like any religious organization which does not agree with them are the ones who are the bad guys.

We need to put a stop to this and we start in November, by un-electing those who wish to remove religion from the public square.

3 thoughts on “The War on Catholics Or Women Or Something”